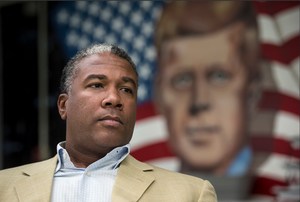 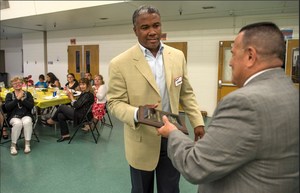 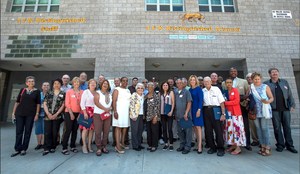 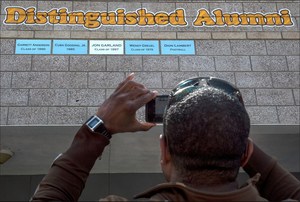 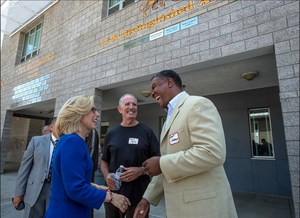 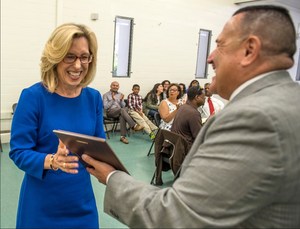 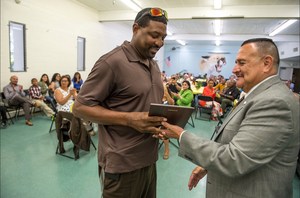 The school has unveiled a Wall of Fame to recognize notable alumni, as well as long-serving teachers, counselors and coaches. Greuel, Anderson and Lambert were at the school Thursday for an event to christen the wall, as were retired teachers who remembered Kennedy’s beginnings as an integrated campus in the era of busing.

Anderson, one of the alumni who received recognition Thursday along with Lambert and Greuel, said he realized as an adult what the school meant to him.

“This is one of the places where I started from, that provided a way for me to do the things I did in my life,” Anderson said. “It’s an honor for me. It’s humbling,” he said of the recognition. Anderson graduated in 1990 and played baseball and basketball at Kennedy. The coaches created a family of sorts among the athletes, regardless of the sports they played. “For a public school, looking back, it was a family atmosphere.”

Greuel, who graduated in 1979, was a cheerleader and student body president at Kennedy. The latter helped lay the path for her future career in politics, she said.

“Kennedy High School was, and still is, a fabulous place where I not only learned a lot, but got my political chops,” Greuel said. The long service of the teachers and staff recognized Thursday shows their commitment.

“They were dedicated,” Greuel said. “That’s what you got, the sense, when you were a student, that it wasn’t just a job for them. It was more than that.”

The wall started as a smaller project to recognize distinguished alumni, said Assistant Principal Robert Clarke. But the scope grew.

“We decided that if it weren’t for all the teachers that contributed so much blood, sweat and tears to this school, we wouldn’t have these distinguished alumni,” Clarke said. The wall, identifying staff who have worked 20 years or more at Kennedy, includes about 50 names so far. More will be added, Clarke said.

John F. Kennedy High School opened in 1971 as an integrated school in the time of busing. There were tensions, and fights, as students were brought in from other schools in Pacoima, San Fernando, even as far as downtown Los Angeles.

“It was a newly-integrated school,” said John Mynster, a history teacher at Kennedy from the school’s opening until his retirement in 2001. He was among the former and current staff whose names have been included on the wall.

“There were some racial tensions, but as time went on, the year went on, it settled down,” Mynster said. “The faculty that was here was very good. It was a racially diverse faculty too, so I think that probably helped.”

John Haynes, who coached football and gymnastics, worked at Kennedy from its opening days until retiring in 2000. He remembered the growth of a sports tradition “from scratch.”

“We had transfers from three different schools, so there was no loyalty to the school when we opened,” he said. Students didn’t always get along.

“We had no tradition in athletics to go by,” he said. But four years after Kennedy opened, football games were packed with spectators and the Golden Cougars were well known. “Being in on the ground floor, seeing the school open and then rise to prominence was a great experience,” he said.

“It started out, we had problems orientating the students to a different school,” including fights, he said. Team sports helped resolve issues.

“I think sports had a lot to do with that, giving kids the opportunity to see that everyone could be an addition to their team.”